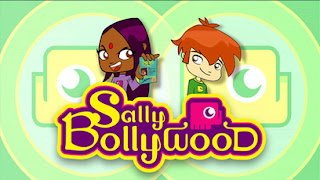 Sally Bollywood is a French-Australian-Indian animated series, which is translated and sold to numerous countries around the world. The series follows the adventures of Sally who, along with her friend Doowee. operates a private detective agency. Together they investigate cases brought to them by their school friends in a multicultural suburb of a big, western city, “Cosmopolis”. The thefts are usually just children stealing other children’s items or playing pranks on each other.
SERIES INFO:
NAME: SALLY BOLLYWOOD
LANG: HINDI
QUALITY: HQ 480P AMZN {WEB-DL}
SEASON 1
Episode 1-Cockroach Capers
[Google Drive]
Episode 2-Trapped By The Internet
[Google Drive]
Episode 3-Talent Will Out
[Google Drive]
Episode 4-Sos Sarees

Episode 7-Trouble At The Museum