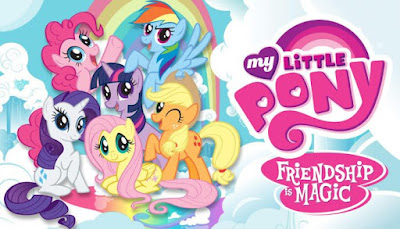 Celestia, the ruler of Equestria, sends Twilight Sparkle, a bookish unicorn, to Ponyville to improve her social skills. At Ponyville, Twilight makes new friends who help her solve various problems.
Season 1
Episode 01-Friendship Is Magic Part 1
Download-Friendship Is Magic Part 1 [132 MB]
Twilight Sparkle, an antisocial unicorn, learns of a prophecy that states the evil Nightmare Moon will return during the upcoming Summer Sun Celebration after one thousand years of imprisonment in the moon. Twilight tries to warn Princess Celestia, her mentor, of the impending danger, but the princess dismisses her and sends her to Ponyville to check on the preparations for the celebration, and make friends with ponies there. Twilight reluctantly meets the five ponies in charge of the preparations: Applejack, Rainbow Dash, Rarity, Fluttershy, and Pinkie Pie. At the celebration, Nightmare Moon appears in place of a missing Princess Celestia and decrees everlasting night.